Share a memory
Obituary & Services
Tribute Wall
Read more about the life story of Albertine and share your memory.

Albertine Vincent, of Peterborough, died peacefully on December 24, 2022 at Wachusett Rehabilitation Center in Gardner, Massachusetts after a brief illness.

Her long life was defined by an innate sense of resourcefulness, good humor, and a deep curiosity about people and their personal stories. This often led to life-long friendships and humorous stories of uncanny serendipity, which became legendary in the family.

Albertine Viveiros Vincent was born on July 25, 1923, in Fall River, Massachusetts, the fifth of seven children. Her parents, Joao da P. Viveiros and Marianna A. Rodrigues Viveiros, were both born on the island of Sao Miguel, Azores, immigrated independently to the United States.  They settled in the primarily Portuguese neighborhood on Grant Street, to work and raise their large family.

As a young woman, Albertine met the man she would later describe as one of the most handsome young men in Fall River, Theophilo Vincent. Theirs was a courtship interrupted by his service as an interpreter-translator with the U.S. Army Military Intelligence in Europe during World War II.  After his discharge, they married on May 4, 1946 and settled in Washington, CT where the first two of their five children, Elizabeth and Joan, were born there.

By 1950, the young family moved to Huntington, Long Island, New York and welcomed their third child, Paul. While her husband’s career continued to advance, Albertine focused on her young and growing family and preparing them for the world.  In 1954, they moved to Greenlawn, Long Island, New York where their fourth child, Barbara Ann, and fifth, John Gregory, were born.

Albertine and her husband traveled extensively throughout Portugal, the Azores, and western Europe, visiting historically significant sites from World War II, museums, and cathedrals. They delighted in being seasonal residents of the quaint and beautiful towns along the Mediterranean.  After a decade of international travel, they settled on a decade of seasonal residency in Hilton Head Island where they found peace and solace along the shores of the Atlantic Ocean, collecting new friends before returning to New Hampshire.

After Albertine’s husband of 67 years died in 2013, her friends from the Wellness Center at Monadnock Community Hospital and her dear neighbors became even more important to her. She cherished the visits from her grown children, grandchildren, great-grandchildren, countless nieces and nephews, her remaining siblings, and friends from her years of travel. Her children and grandchildren inherited her love of travel and celebrated with her when she applied for her Portuguese citizenship. On March 18, 2016, she became the oldest person in the history of the Consulate of Portugal in Boston to receive Portuguese citizenship, a gift she passes on to the next generations.

She is survived by her children Elizabeth Vincent Brown and husband, Peter Howe, of Keene, NH and Las Cruces, NM; Joan O'Connell of Hampstead, NH; Paul Vincent of Oberstdorf, Germany; Barbara Ann Ettinger and husband, Jeffrey, of Vernon, CT; and John Gregory Vincent and wife, Deb, of Augusta, GA. She also is survived by nine grandchildren and three great-grandchildren. The family is forever grateful to her three caregivers-turned-adopted-family whose attentive care allowed her to live independently at home well into her 99th year. The family also extends deep gratitude to the loving and skilled staff at Wachusett Rehab.

Jellison Funeral Home, in Peterborough, is assisting the family with arrangements. A Celebration of Life will be held in Peterborough on February 4, 2023 at 1:30 in the 1833 Room of the Peterborough Public Library.  In lieu of flowers, the family requests donations be made to the Disabled Veterans of America or the Alzheimer’s Foundation.

To send flowers to the family or plant a tree in memory of Albertine Vincent, please visit our floral store. 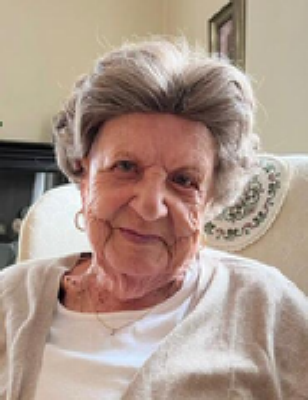