Plant a tree in memory of Christine
An environmentally-friendly option 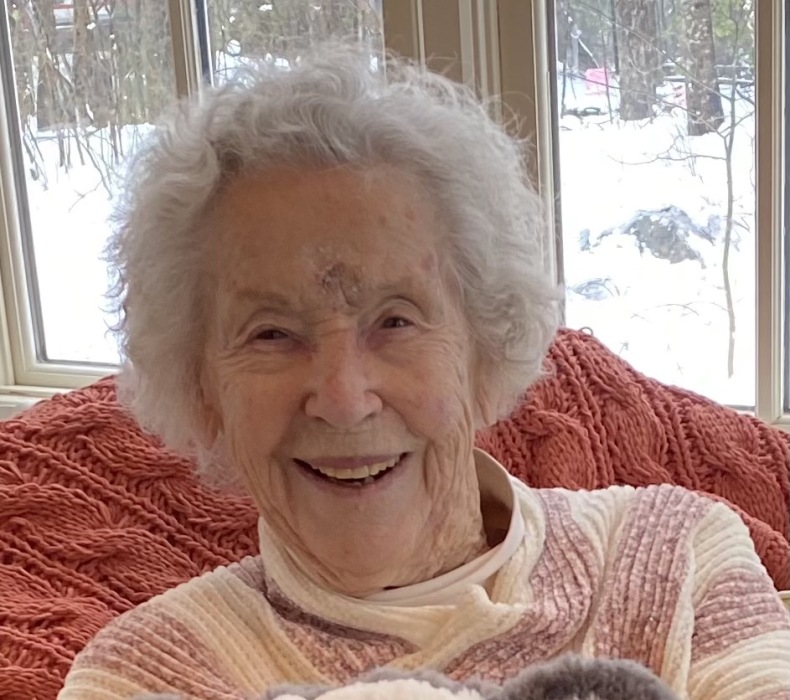 Christine Kelly, age 97, passed away peacefully on March 6, 2021, at her son’s home, in Dublin, New Hampshire.  She was born on January 9, 1924 in Mobile, Alabama to Robert and Myrtice Shackleford. A Southern belle in all respects, she enriched our lives here in ‘the North’ with her grace, beauty, and warm-hearted ways.

Christine married Edmond Kelly on May 22, 1944, when he was stationed at the Navy airfield in Pensacola, Florida.  Ed, a pilot who served in the Pacific during World War II,  met Christine on a blind date in Mobile, set up by her closest friend. Christine’s parents had a summer house on the beach in Gulf Shores, AL, and they would tell stories of Ed buzzing their house with barrel rolls in his fighter plane when he was out on training.  Such was their early romance.

After Christine’s marriage, she moved north and a profoundly different life, with Ed finishing his education at Trinity College, the birth of her children, and an illustrious and very full family life in Fitchburg MA where Ed joined the family paper manufacturing business, Crocker Burbank Company.

After retirement Christine and Ed moved to a new home in Dublin NH to be near family and many old and new friends. ‘Chris’ was a devoted wife and mother, and an enthusiastic and generous soul, who cared deeply for her family and community.  Well known for her service work with the United Way, Meals on Wheels, and other volunteer charitable work, she uplifted the lives of the many who knew her. She was President of the Garden Club of Dublin 1983-1984 and cultivated beautiful gardens wherever she lived.  Among Chris’s family and close friends, she was known for her love of playing bridge, music, dancing, tennis and golf and when her children were young, she and Ed derived great pride and joy in ensuring that they were also well-versed in these arts.

Christine is survived by her children, Charlotte, Ed, Mitch and Robert, nine grandchildren and 27 great grandchildren who she loved, inspired and supported in so many ways. She will be deeply missed. A memorial service will be held next summer where she will be buried next to Ed at the Dublin Cemetery.

Plant a tree in memory of Christine by clicking here.
To send flowers to Christine's family, please visit our floral store.

Plant a tree in memory of Christine
An environmentally-friendly option

Plant a tree in memory of Christine

1 tree planted in memory of Christine

Reading of the passing of Christine Kelly, I couldn’t help but reflect on my fond memories of Mrs. Kelly when I would go to play with Charlotte at her beautiful house on View Street. I remember a beautiful, elegant, glamorous mother who was always warm and welcoming to her children’s friends. She seemed to delight in the joyful chaos and made her home an inviting and enjoyable place to gather. Mrs. Kelly epitomized the charm and gentility of a true Southern belle. My sincere condolences to the lovely family I knew long ago.

A Memorial Tree was planted for Christine Kelly

Plant a tree in memory of Christine