Plant a tree in memory of Eldon
An environmentally-friendly option 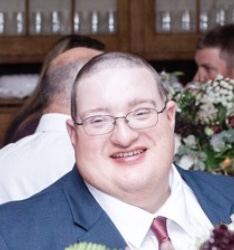 Eldon Richard Munson III died on April 3, 2021, having battled leiomyosarcoma since February 2020. He was born October 17, 1988 to Janet J. Munson and Eldon R. Munson Jr. He was a lifelong resident of Francestown, NH, where he lived on the family farm. First homeschooled, he later graduated from Trinity Christian School in Concord, NH, and from the First Course Culinary Program with ServSafe certification. He worked at Francestown Foods and PC Connections.

Eldon is survived by his older siblings Sara, Genevieve (m. Michael Cook), Kathleen, and David (m. Ashley Porrazzo), six nephews, and two nieces, who, together with his parents, are known to much of New Hampshire primarily in their connection to him. Eldon volunteered at Scott-Farrar in Peterborough, Bowman Place at Olde Bedford, and the Brain Injury Association of New Hampshire, earning several awards for his work as a member of the Walk By the Sea Planning Committee. He donated enthusiastically to Toys For Tots and Thanksgiving turkey drives and was a familiar face in the center of Francestown, supporting primary and general elections.

Eldon loved to provide a personal touch. Gifts were wrapped with recipient-specific wrapping paper, and no outgoing mail departed without the appropriately themed stamp. He had the right Aloha shirt for any event. He enjoyed shopping, decorating, party planning, snow plowing, and holidays.

A country boy at heart, Eldon continually expanded his world. He established strong bonds with Higgins Beach, ME, and frequently traveled with family to Pennsylvania, New York, and Massachusetts. His fondness for Hawaii grew with repeated visits. He was a proud passport holder and traveled to Mexico, Canada, and Bermuda, preferring border agents who stamped, rather than scanned, his passport.

There were few strangers in Eldon’s life, as cashiers, clerks, travel agents, and post office employees quickly became “friends” alongside his classmates and extended family. His family would like to acknowledge and thank the many whose patience, good nature, helpfulness, and willingness to see the humanity in others gave Eldon confidence and a sense of belonging. Over the past year, Eldon received extra special care from health professionals at Monadnock Community Hospital, Dartmouth-Hitchcock Norris Cotton Cancer Center, and HCH Hospice Care as he progressed down his bucket list, enjoying time with friends and family.

In lieu of flowers, Eldon’s family asks you to consider donating to BIANH, HCH Hospice Care, Trinity Christian School, or rare cancer research. A celebration of life will be scheduled at a later time.

Plant a tree in memory of Eldon by clicking here.
To send flowers to Eldon's family, please visit our floral store.

Plant a tree in memory of Eldon
An environmentally-friendly option

Plant a tree in memory of Eldon

15 trees planted in memory of Eldon

There are 11 photos available in the gallery

May your memory and life be an inspiration to us all!

With all our love and prayers,
Bowyer Family

Your friends at HarbourVest

Your friends at EGA

So sorry to hear about Eldon III. Our best to all of your family.
Your friends at EGA

A Memorial Tree was ordered in memory of Eldon Richard Munson III by Leon and Donna Nelson.  Plant a Tree

August, Wednesday morning donuts at Higgins Beach Maine will never be the same.

Eldon, thank you for sharing your sweet,loving,caring way to me and my grandchildren as we munched on our chocolate coconut donuts.

Your Friend,
The Talking Car

Plant a tree in memory of Eldon