Share a memory
Obituary & Services
Tribute Wall
Read more about the life story of Joan and share your memory.

Joan P. Schlieben, 79, of Peterborough, passed away peacefully at Rivermead on November 11, 2022.   She was born in Newburgh, NY on October 16, 1943, the daughter of Joseph and Florence (Farina) Parrella.

Joan grew up in Newburgh, with her siblings Stephen, Judith, and Janice.  Joan was always ambitious and independent. She graduated high school a year early and was the first in her family to attend college, earning a Bachelor’s Degree from the College of St. Rose in Albany, NY.  She later received a Masters in Education from CUNY and a Masters in Urban Planning from Boston University.

She lived in New York City for several years and was a special education teacher, save for a year where she toured Europe on her own, including much of Eastern Europe at a time when doing so as an American was unheard of. After she returned, she met Paul C. Schlieben.  Soon after, they prepared for a grand adventure together –repairing a 26 ft. sailboat, taking it down the Atlantic Coast to Key West, Fl, where they married in 1973.

No challenge seemed too daunting to Joan. Paul was a dreamer, Joan was the realist whose organization skills, hard work, and matter of fact approach helped make things happen. They returned and moved to Boston, MA, bought and renovated a house themselves, and started a family. They then moved to Peterborough in 1983, and started SoftLanding Systems, INC. in 1989.  Joan served as the company’s business manager and helped guide the company to growth and profitability until her retirement in 2003.

Joan was a lover of the outdoors – X-Country and downhill skiing, going on long distance bike tours, and hiking and camping around the Northeast. She was a competitive racquetball and tennis player.  Even twenty years after her diagnosis of Parkinson’s Disease, she would walk three miles daily, rain or shine. She also had a great love for community: she started babysitting coops, school committees and participated in book clubs and Italian classes, and generously supported many local causes. Most of all, she loved sitting with friends and family with a good glass of wine or Scotch and having a good laugh.

Joan is survived by her children, Roy and his wife Jennifer of Peterborough, and Jessica and her husband Brendan of Boston, MA, and her Grandchildren Madeleine and Johanna. She was predeceased by her husband Paul in 2012.

In lieu of flowers, memorial contributions may be made in Joan’s name to the Michael J. Fox Foundation for Parkinson’s Research.

To send flowers to the family or plant a tree in memory of Joan Schlieben, please visit our floral store. 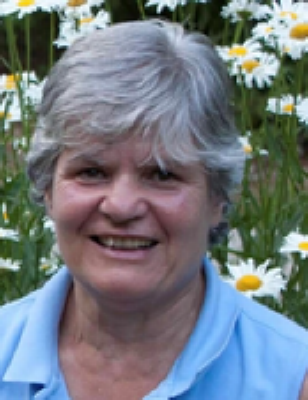